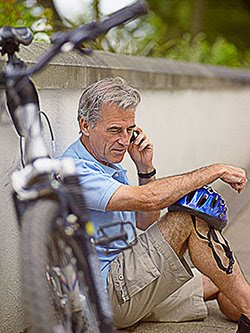 “This time is different.” Beware those four little words. They are perhaps the most dangerous words an investor can believe in. If you believe “this time is different,” you are mentally positioning yourself to exit the stock market and make impulsive, short-sighted decisions with your money. This is the belief that has made too many investors miss out on the best market days, and scramble to catch up with stock market recoveries.

Stock market investing is a long-term proposition, which is true for most forms of investing. Any form of long-range investing requires a certain temperament. You must be patient, you must be dedicated to realizing your objectives, and you can’t let short-term headlines deter you from your long-term quest.

But wait, isn’t this time different? Well, it is unusual. We are seeing a level of government intervention in the financial markets that we haven’t seen since the 1930s. We’ve also seen banks, insurers and brokerages seized or rescued. So when headlines say “bank failure” and “government bailout”, and media outlets conduct “man on the street” interviews, you are going to get a sound bite or two of someone, not an economist, wondering aloud about a second Great Depression. (In every recession, some news story inevitably appears weighing how the current economic situation stacks up against the 1930s.)

But you know what? This time is different. Today, the federal government is able to intervene in the financial markets in a way it couldn’t then. When the Bank of the United States (one of the bigger private banks of that time) collapsed in 1930, the Federal Reserve lacked the power to rescue it. It was an event that gravely wounded the banking system and aggravated the Depression.

Today, by contrast, the U.S. government has pulled out all the stops. You have $700+ billion assigned to mop up bad debt and ease a credit squeeze. You have the Treasury taking stakes in banks and the Fed issuing loans and helping to engineer bank mergers. You have economic stimulus packages and federal government efforts to stem foreclosures. Yes, this is different, and welcome.

What happens when investors believe those four little words. It’s called panic. In early October, we all saw it. And yes, the potential for panic still exists, witness the morning of October 24, when index futures declined so fast that “circuit breakers” had to be enacted to halt selling on Wall Street.

The silver lining here is that recently, the market has begun to move in response to standard indicators again – earnings reports, economic releases from the federal government, news from the housing sector, etc., rather than fear. The news hasn’t been great, but investors have shifted their attention from credit market concerns (inspiring panic) to economic concerns (resulting in more predictable behavior).

Look at the good news we’re getting. No kidding, there really is some. As of Friday, the overnight LIBOR rate (the interest rate banks charge each other for loans) was 1.28% – below the benchmark U.S. interest rate of 1.5%, well below the high of 4.82% reached on October 10. Existing home sales increased 5.5% in September, as a result of a buyer’s market – and by the way, year-over-year sales were up 1.4%. The average rate on a 30-year fixed mortgage fell to 6.04% this week, down from 6.46% last week. Remember when oil prices were $147 a barrel? On October 24, they settled at $64.22 per barrel (56% lower). The Treasury Department may soon move to shore up more than 20 financial companies through cash injections, according to Bloomberg; PNC Financial Services Group announced Friday that it would use Treasury funds to buy National City Corporation, effectively creating one of the larger banks in the U.S.

This is the time to stay in the market. Withdrawing money from a retirement savings account (and the investment funds within it) might feel rational in the short term, but it can be hazardous for the long term, especially since many Americans haven’t saved enough for retirement to start with. We’re looking at a turbulent stock market right now, and the market may fall a bit further before a recovery builds momentum. The key is to remember that a recession is a few quarters long, not the length of your retirement. Give us a call if you have any questions. Another great article in Barron’s is “That Was Way Too Close for Comfort!”