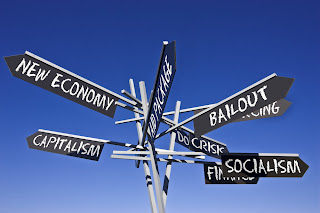 What causes a recession? Recessions are ultimately a product of excess capacity in an economy — a condition where you have more supply than demand. Economic sectors grow steadily to meet years of increasing demand, but then when demand falls, there are economic downturns and layoffs and sectors contract.

Many economists trace our current recession to excess capacity in the housing sector, which still has a remarkable inventory of unsold homes. With more supply than demand, prices fell and you had a ripple effect throughout the broad economy.

What defines a recession? Maybe the question should be “who defines a recession?” While the vast majority of economists now assume we are in one, there are two standard definitions. When gross domestic product (GDP) shrinks for consecutive quarters, you have a recession. But this doesn’t always occur. In the 2001 recession, GDP alternately grew and shrank and real consumer disposable income actually grew.

It is hard to confirm a recession until you are several months into it. The nonpartisan National Bureau of Economic Research (NBER) has long defined and “closed the book” on U.S. recessions after the fact. (Visit nber.org/cycles.html to see a quick history.)

Is this recession better or worse than recessions past? Until it is over, we won’t actually know. In stock market terms, this one is pretty severe – but other recessions have been much worse for Main Street. The 1981-82 recession saw 10% unemployment for the first time since the Great Depression: in 4Q 1981, 10.5% of Americans were out of work, including 28% of teenagers and 20% of African-Americans. In case you were wondering, a common definition of a depression is a jobless rate of 25% or higher lasting for more than two years. We are nowhere near that level of unemployment.

One thing is certain: since World War II, recessions have been shorter. Part of the credit goes to a more active Federal Reserve in the post-WWII era. Post-1945 recessions have averaged approximately 10½ months. Recessions prior to World War II tended to average around 20 months by NBER’s measure. NBER counts 33 recessions since 1854; the worst lasted from 1873 to 1879.

Markets typically fall in a recession, right? Not always. Typically, a bear market foretells a recession. But the ten best rallies in the history of the Dow Jones Industrial Average, the ten best market days, if you will, have all happened in bear markets. After Black Monday in 1987, many people thought a recession would occur, but it didn’t happen until three years later.

When does a recession end? When demand tops supply again. When demand increases, sectors start hiring and consumers start spending forcefully. If you look at recessions in different parts of the world on a graph, some are W-shaped (false recovery, descent, real recovery), some are L-shaped (as in Japan in the 1990s, where the economy shrank and stood still for a decade), some are V-shaped (sharp drop, sharp rebound) and some are U-shaped (long, gradual decline and long, gradual rebound). Some economists feel that America is seeing a U-shaped recession.

What does an investor do in a recession? It depends on the investor and his or her long-term goals. You certainly don’t want to make any rash moves. The perspective and professionalism of a financial advisor can help you focus on the long-term upside as you plan to position yourself for a recovery.